My major project of summer 2019, I finished a month long trip on August 3rd.

The Pacific Northwest  is gorgeous. I had fantastic weather. Very few biting insects.

The theme was rails to trails. I tried to ride as many railway lines converted to non-motorized transport as I could.

I started in Nanaimo wanting to get to Lake Cowichan as quickly as possible.

Lake Cowichan is the western terminus of the Great Trail.

After visiting friends in Victoria, I took the most direct route to visit friends in Port Townsend via the American San Juan Islands. 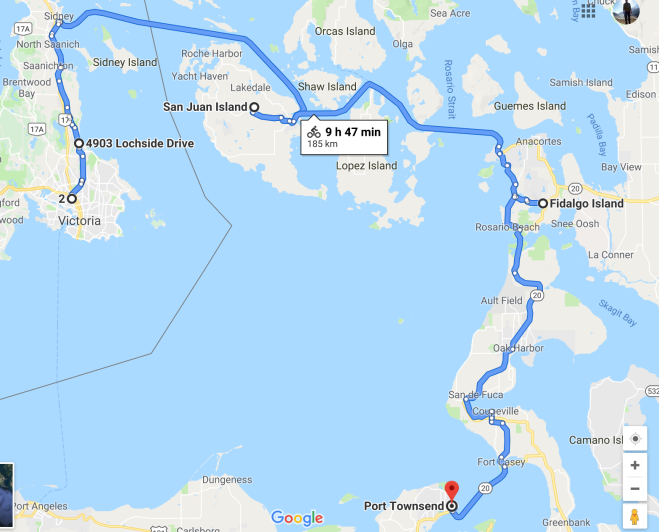 To avoid some highway miles, Doug & Diana delivered me to the Bainbridge ferry. I cycled the Burke-Gilman rail to trail and others connected to get to the fantastic Iron Horse Trail out of Rattlesnake Lake.

Just past Ellensburg I was forced off the semi-official GART on to secondary highways and alternative trails that took me through Spokane.

I found this section of GART to be too soft and sandy for my tires. Also it was too disconnected.

I finally stopped at Plummer, Idaho. Dave Adlard picked me up. We dropped the bike at a shop for repair as I’d broken 3 spokes the previous evening. And then took an indulgent 8 days off in Couer d’Alene.

Dave and Jeni rode with me away from the Adlard log cabin in Athol. We headed towards Sandpoint on back roads and I later rejoined the route shown in the map below. Dave had suggested I cross the border close to pretty Metaline Falls.

For decades I’d wanted to ride the Kettle Valley Rail (KVR) Trail and the Columbia & Western Rail Trail. It’s totally wonderful. And obviously one of the great cycling routes of the world.

Hope to Vancouver and on to Parksville on the Island was problematic. There is no excellent route yet available. Cyclists I met took a number of different roads.

Psychologically finished at Hope, I managed a series of rides, buses, trains and ferries to cover the 240km in about 36 hours without sleeping.

3 thoughts on “SUMMING UP – my Pacific NW cycling tour”