A Study in Scarlet is an 1887 detective mystery novel by Sir Arthur Conan Doyle, featuring the debut of Sherlock Holmes. 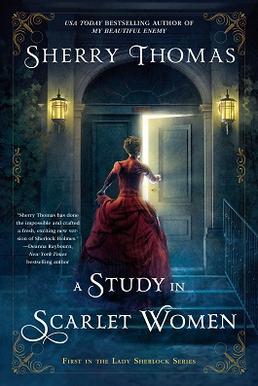 A Study in Scarlet Women, a 2016 mystery novel by Sherry Thomas, the first entry in the “Lady Sherlock series“, in which Sherlock Holmes is actually a public persona created by a woman detective named Charlotte Holmes …

Charlotte is Sherlock. Her partner a wealthy widow, Mrs. Joanna Watson, whose husband was an army doctor killed in Afghanistan.

Sadly, I know Sherlock. And Charlotte is no Sherlock.

Constance Grady for Vox gave it two and a half stars saying “A Study in Scarlet Women has a killer premise, some interesting character work, and a regrettably poorly structured plot.”[4]

As I post there are 3 more Lady Sherlock sequels. But I won’t carry on.