A Game of Thrones is the first book in the sprawling A Song of Ice and Fire series, seven planned novels.

George R.R. Martin (GRRM) looks exactly as you would picture him.

I recommend it to any fan of this genre.

As usual, I listened to the audio version read by Roy Dotrice. He is fantastic at distinguishing between the many hundreds of characters.

At over 33hrs for the unabridged version, it’s EPIC.

(I may need to listen to it again on a LONG hike before deciding whether to move on to Book 2, A Clash of Kings.)

… Martin’s Seven Kingdoms resemble England during the Wars of the Roses, with the Stark and Lannister families standing in for the Yorks and Lancasters. The story of these two families and their struggle to control the Iron Throne dominates the foreground; in the background is a huge, ancient wall marking the northern border, beyond which barbarians, ice vampires, and direwolves menace the south as years-long winter advances. Abroad, a dragon princess lives among horse nomads and dreams of fiery reconquest.

There is much bloodshed, cruelty, and death, but A Game of Thrones is nevertheless compelling; it garnered a Nebula nomination and won the 1996 Locus Award for Best Fantasy Novel. … 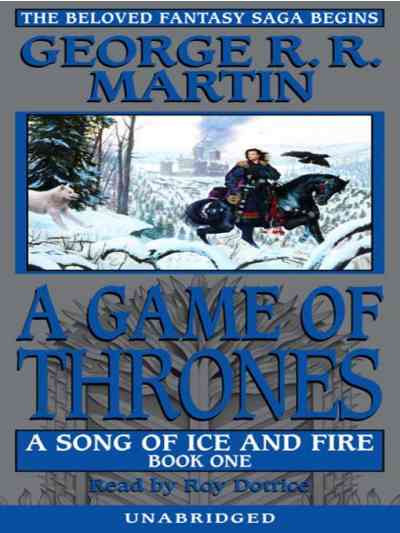 Wikipedia – A Game of Thrones

It was announced January, 2007 that HBO Productions has purchased the broadcast rights for the entire A Song of Ice and Fire series, with the author also serving as co-executive producer on the project. The plan calls for each book from the series to be filmed over an entire season’s worth of episodes.

2 thoughts on “A Game of Thrones – George R.R. Martin”