Since I was in Edinburgh, I listened to one of the classic ‘Tartan Noir‘ Inspector Rebus books, A Question of Blood.

Given his contempt for authority, his tendency to pursue investigative avenues of his own choosing, and his habitually ornery manner, it’s a wonder that John Rebus hasn’t been booted unceremoniously from his job as an Edinburgh cop. He certainly tempts that fate again in A Question of Blood, which finds him and his younger partner, Detective Sergeant Siobhan Clarke, trying to close the case of a withdrawn ex-soldier named Lee Herdman, who apparently shot three teenage boys at a Scottish private school, leaving two of them dead, before turning the pistol on himself.

“There’s no mystery,” Siobhan insists at the start of this 14th Rebus novel (following Resurrection Men). “Herdman lost his marbles, that’s all.” However, the hard-drinking, chain-smoking Rebus, who’d once sought entry into the same elite regiment in which Herdman served (but ultimately cracked under psychological interrogation), thinks there’s more motive than mania behind this classroom slaughter. … 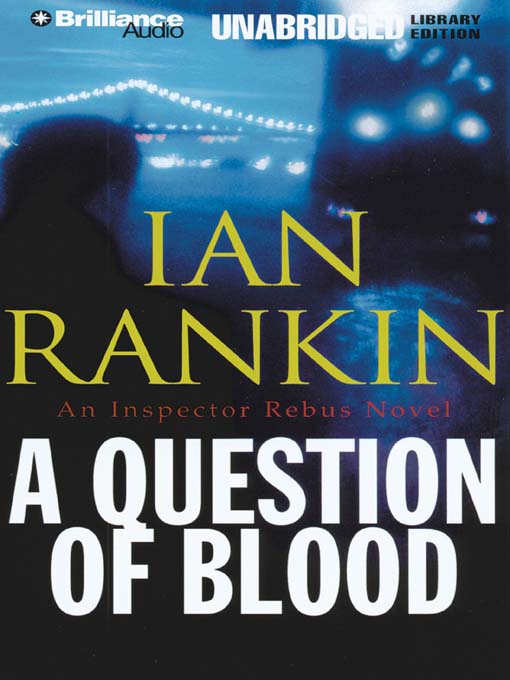 A Question of Blood

I could not get into the Ian Rankin presentation at the Edinburgh Book Festival. (Everything popular is sold out quickly.) Same problem with another big name there, Margaret Atwood.

I understand that Exit Music (2007) is supposed to be the 17th and last Rebus book. I’ll put that on my audible wish list.

UPDATE – Exit Music turned out to be his retirement book. But Rebus keeps popping up in subsequent books.