The Poisonwood Bible (1998) is a bestselling novel about a missionary family, the Prices, who in 1959 move from Georgia to … the Belgian Congo …

… to save African souls.

Like most readers, I love how the narrative alternates between the four daughters.

Adah is my favourite.

Adah Price (14 at start of the novel) – Hemiplegic from birth, Adah is silent, brilliant in math and languages, witty, skeptical, sarcastic, envious of her twin sister, and prone to self-pity.

She reminded me a little of the brilliant Norma Cenva, a congenital dwarf, mathematical genius. One of the most important characters in the entire Dune franchise.

And Owen Meany, the malformed dwarf, “God’s instrument”, one of the great characters of fiction.

In some ways the book is cliché, though. I immediately thought of Mosquito Coast (1986) and the brilliant film, The Gods Must be Crazy.

Yet it kept me going strong right up to about page 500. When the women flee after one of the daughters is killed.

The author lived in Congo as a child. The details feel real. 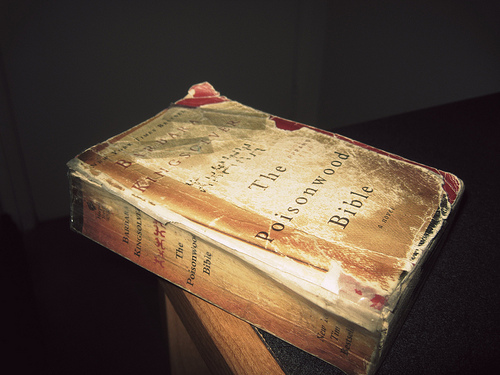 Barbara Kingsolver is an American novelist about my age who often writes about social justice.

In 2000, she established the Bellwether Prize to support “literature of social change.”

In the late 1990s she was a founder member of the Rock Bottom Remainders, a rock and roll band made up of published writers. Other band members include Amy Tan, Matt Groening, Dave Barry, and Stephen King. (That must have been fun.)

Leave a comment if you liked the book. It’s really got me thinking.

One thought on “Poisonwood Bible”