Last week I was hiking the white mountain villages called Las Alpujarras. I was reminded of this excellent book series.

Christopher ‘Chris’ Stewart (born in 1950), was the original drummer and a founding member of Genesis. 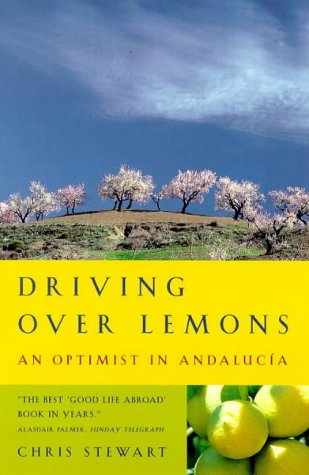 Unexpectedly, he has become a very successful author.

… Chris transports us to Las Alpujarras, an oddball region south of Granada, and into a series of misadventures with an engaging mix of peasant farmers and shepherds, New Age travellers and ex-pats. The hero of the piece, however, is the farm that he and Ana bought, El Valero – a patch of mountain studded with olive, almond and lemon groves, sited on the wrong side of a river, with no access road, water supply or electricity. Could life offer much better than that?

It is laugh out loud hilarious. I highly recommend it to everyone.

Driving Over Lemons: An Optimist in Andalucia

Chris was not really serious about becoming a musician and left the band in the summer of 1968. … After travelling and working throughout Europe, Stewart settled and bought a farm “El Valero” in the Alpujarras region of Andalusia, Spain where he lives and works with his wife Ana Exton and daughter Chloe. He came in last place for the position of local councillor in the 27 May 2007 local elections in Órgiva representing the Green Party, where he received 201 votes (roughly 8%).

He is now better known for his autobiographical books, Driving Over Lemons (1999) .. and the sequels, A Parrot In The Pepper Tree … and The Almond Blossom Appreciation Society (2006)

… The first two are also available as audiobooks … narrated by Stewart.